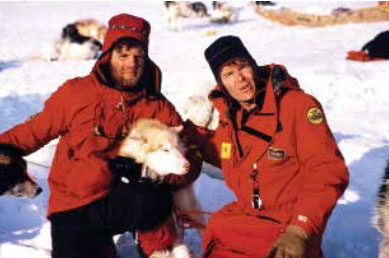 Skiing to the Poles-Part Two In Part I of this two-part article, which appeared in the November-December issue of Skiing History, author Jeff Blumen- feld explained how skis played a critical role in the Arctic and polar expeditions of the late 1800s and early 1900s. Part II looks at the role of skis in modern-day expedi- tions by explorers like Paul Schurke, Will Steger and Richard Weber.

Blumenfeld, an ISHA director, runs Blumenfeld and Associates PR and ExpeditionNews.com in Boulder, Colorado. He is the recipient of the 2017 Bob Gillen Memorial Award from the North Ameri- can Snowsports Journalists Association, was nominated a Fellow of the Royal Geographic Society, and is chair of the Rocky Mountain chapter of The Explorers Club.

In 1986, a 41 lyear old Minnesotan named Will Steger launched his 56 Steger North Pole Expedition, financed by cash and gear from over 60 companies. The expedition would become the first confirmed, non-mechanized and externally unsupported dogsled and ski journey to the North Pole—suggesting that Robert E. Peary and Frederick Cook could indeed have reached the pole in 1909 using the same basic equipment.

Fast forward to spring 1989, when Steger’s former co-leader to the North Pole, Paul Schurke, led his own expedition across the  Bering Strait, from Anaydr in the former Soviet Far East to Kotzebue in northwest Alaska. It was a project that President George H.W. Bush and former Soviet leader Mikhail Gorbachev credited with easing Cold War tensions. Using dogs, skis and traditional 30-foot vessels called umiaks, 12 Soviet and American adventurers, including three Eskimos and three Chukchis, visited a string of remote Siberian villages, crossed the International Date Line, and continued the journey to native towns in Alaska. (I promoted the Bering Bridge Expedition on behalf of its major sponsor, Du Pont, and have remained in touch with Schurke since those days.)

Read the rest of this article 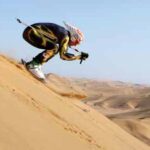 History Proves Skiers Will Ski on Anything – Especially Sand

by Peter Hines, originally published in snowsportsna.com So I was one of the first people in the lift line at […] 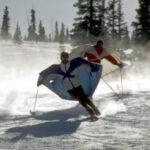 From Jet Stix to Tinkle Tabs, these crazy ski products faded, fizzled or failed to stand the test of time. […]