So I was one of the first people in the lift line at Bretton Woods on Thursday morning. I caught the third chair up with three other gents. I was sitting on the end of the quad chair as the other three were together. It turns out that the three men were all in their 80’s. I could help but overhear their conversation. It went something like this:

“Ed couldn’t make it today, he’s having his wrist operated on” said Ralph. “Something like carpel tunnel. He had one hand done and he is having the other one. I skied with him on Sunday. I only made three runs and then I was out of here” he continued. “I heard the parking lot was full by 7:30. Where’d ya park”, asked Dean. “Oh, I have a handicap plate, so I found a spot” said Ralph.
“Where’s Walt today” asked Dean? “Oh, he has a cold”, said Ralph.

“The cardiologist said that they are going to wire me for sound” said Dean. Ralph replied, “you’ll have all the bells and whistles then”. Dean replied, “ I have a lot of them now”.

Ralph stated “my buddy George who goofed up his leg skiing a few years back had his leg operated on. They took a titanium rod out so they could replace his knee. It had to be some special fit. For seven years his one leg was an inch shorter than the other. Now both legs are the same and he had to go out and get all new shoes. He’s just walking with a cane now.”

Dean continued, “my left should is all made out of titanium. It hurts 24 by seven. They said that the procedure they did was right but they damaged nerves.”

“George got operated on by the guy that’s the seasonal help over at the hospital and he did it wrong, so George went back into to hospital and they did the whole procedure all over again” said Ralph. “Oh boy” said Dean. “Then he broke his hip, then he broke his wrist, then he had the carpel tunnel” Ralph explained. “How old is he” asked Dean? 80, Ralph replied.

“I’m almost 82and I’m not supposed to do anything that’s physical exertion. Well, I told the doctor a week ago Tuesday that if I die on my skis it’s going to take the undertaker a week to get the smile off my face. But ya know, I’m very cautious” said Dean.

“Ya know who I saw the other day that’s walking kinda slow, is Matt. He ain’t movin too fast” said Ralph. “He broke his leg last year bad. I was goin to stop in and see him one day last week. He had both of his knees done at the same time and then he got an infection” remarked Dean. “He had a real round of it”, replied Ralph. “Then he was skiing over here and broke his leg” Dean finished.

“My biggest problem is walking from the car to the to the base lodge. I got those grippers on my shoes. I fell a couple of times and when I went down I went backwards and landed on my pack and I would have hit the back of my head if I didn’t have the pack” said Ralph.

Dean stated, “ what was it, Thad broke his leg comin into the base lodge on the last day of skiing. He goes up on the deck, fell and broke his leg.” “Really” remarked Ralph.

“Well Ronnie had her knee done but she still wears her brace” said Ralph. “I’ve only seen her once this year” said Dean. “She’s down at Loon today. She called me last night and me to go. She’s takin a liken to Loon. But she’s comin here tomorrow” stated Ralph.

As the chair approached the end the bar went up.

“Well, enjoy. Get the fresh air and enjoy it”, said Dean. “You got that right” said Ralph.

And off they went.

I am always impressed when older skiers get up and out and hit the slopes, especially when it’s the first chair. Despite, cold weather, replaced parts and pain they still continue to get out and enjoy the snow.

As Dean said, if I die with my skis on…… 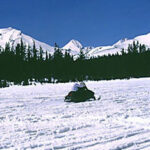 Story and Photos by Vicki Hoefling Andersen High on Adventure, January 2018 Snow-clad mountains and the recreational opportunities they offer draw […]