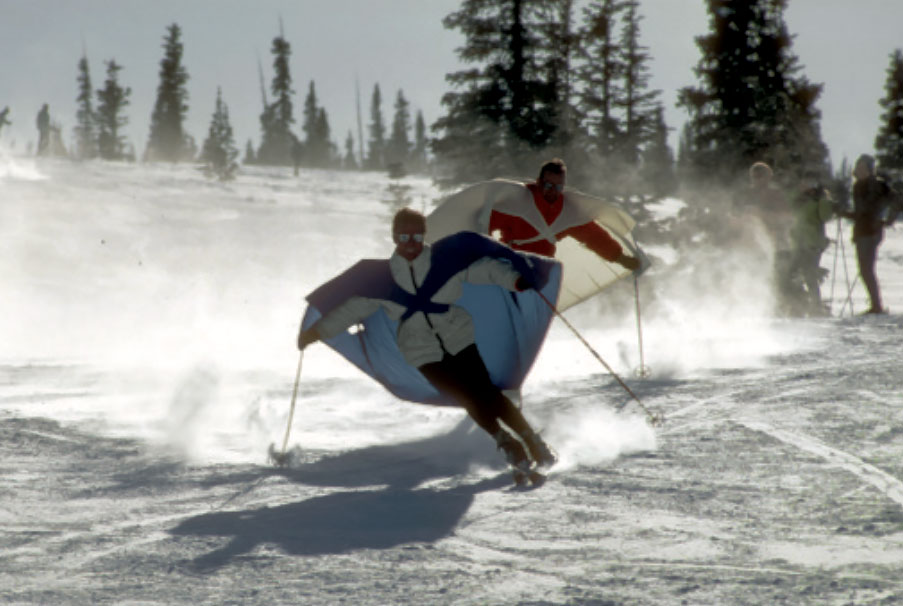 Stein Eriksen and instructors in the Snowmass, Colorado ski school created a sensation in 1968, swooping down the Big Burn in Ski Wings. The cape-like wings were designed by Italian speed skier Leo Gasperl in 1932. Image by Fred Lindholm

From Jet Stix to Tinkle Tabs, these crazy ski products faded, fizzled or failed to stand the test of time.

As empty-nesting downsizers moving from Connecticut to Boulder, my wife and I had to contend with the accumulated flotsam of 30-plus years of marriage.
It was especially hard to part with ski equipment, apparel and accessories. Each imparted great memories of days spent on the slopes.

I gave away my Graves skis. I unceremoniously pitched the Kneissl Blue Star OPs from the early 1980s, along with my Cevas and Club A one-piece suits. But I couldn’t say goodbye to my Ski Wings. Yes, Ski Wings—butterfly-shaped air scoops that attach to ski poles. Four aerodynamically balanced nylon pockets form a cushion of air in front of you. Head straight down a steep bump run and you feel like you’re flying as you literally skim across the tops of moguls.

Originally known as ski sails, this odd product dates back at least as far as Leo Gasperl (1932) and Stein Eriksen, who used them in 1968–69 at Snowmass in Colorado (Skiing History, July-August 2011). They have since been reinvented in Europe as Wingjumps, “the first skiing equipment to offer the feeling of being lifted while skiing, in complete safety!” (That claim, of course, remains to be seen.) What is it about skiing and snowboarding that in- spires budding inventors?

“Scores of ingenious Rube Goldberg ideas have in- vaded the sport throughout its history,” writes ISHA chairman John Fry, author of The Story of Modern Skiing (UPNE, 2006). “There was a ski whose performance could be altered by pumping air into it. Another ski contained rods that you could tighten and loosen to adjust flex and camber.

“Still another contained oil that allegedly caused the ski’s performance to alter in relation to snow surface and temperature. There were bizarre little devices to prevent skis from crossing, and a pair of swiveling rods to keep the skis parallel at all times, so that the skier would never suffer the embarrassment of being seen vee-ing them in a stem.”

Read the rest of this story in .pdf format or online at skiinghistory.org