On a recent media tour hosted by Ski Vermont and the National Snowsports Journalists Association, a group of 16 media visited Bolton Valley Resort and Trapp Family Lodge in northwestern Vermont.

Here’s a behind-the-curtain look at how some ski resorts promote themselves using the age-old “media fam tour.”

The first day of the media tour was dedicated to backcountry skiing at Bolton Valley where there is a growing program on thousands of acres of backcountry terrain with trails and powder laden gladed mountainsides. Adam and Lindsay DesLauriers, who are the children of Ralph DesLauriers, the original developer of Bolton Valley, are now in charge of the resort operation, and they led the group on the tour.

that have been consistently mixed with rain. When it comes to snow the 2,000 foot elevation at the base of Bolton Valley is an advantage that the resort has over other destinations in New England. Some of the media folks were experienced backcountry aficionados so they set off on an alpine touring trek while other media were equipped with backcountry gear and given an introductory clinic.

The following day, some of the hardier members of the media group set out at 6:30 in the morning with guides to ski the backcountry trek from Bolton to Stowe. The rest of the media met at Trapp Family Lodge to gear up for a tour of the trails guided by Sam and Kristina von Trapp, who are the grandchildren of Maria and Captain von Trapp (featured in the movie The Sound of Music). Sam and Kristina run the Trapp Family Lodge operation, which features the lodge, villas, the Outdoor Center and the von Trapp Brewery.

Slayton Pasture Cabin, which is a destination on the upper trails at the ski area. This rustic and cozy log cabin is the perfect rendezvous spot for lunch with family and friends to enjoy a seat by the fireplace or savor homemade soups, snacks, and sandwiches.

On the way back from the cabin (mostly downhill, which was a bit challenging for some of the media skiers), the group made its way to the Bierhall where everyone was treated to a selection of von Trapp beers and lunch. Johannes von Trapp, (Sam and Kristina’s father), who is the last remaining child of Maria and the Captain (they had three additional children after they escaped Europe with the original seven kids) stopped by the Brewery to meet and chat with the media.

It was a busy and tiring two days in Vermont but the fresh snow and camaraderie were well worth the visit to Bolton Valley and Trapp Family Lodge to collect story ideas and memories. 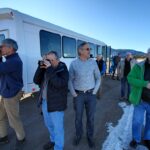 The Western Winter Summit was held this year, for the first time in 25-plus years, in northern New Mexico. From […] 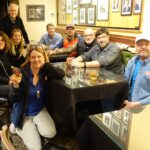 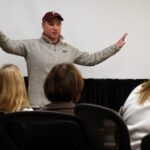 The Nov. 15 meeting during the Boston.com Ski & Snowboard Expo was well attended by members from predominantly New England […]