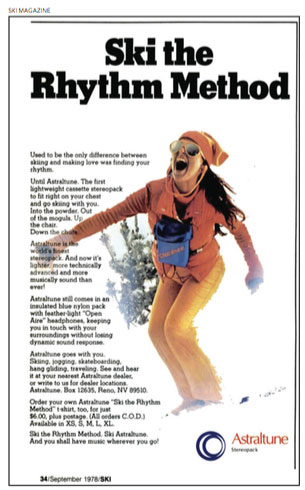 Personal Music is Nothing New

This full-page ad for the Astraltune Stereopack was published in the September 1978 issue of SKI magazine. The portable, personal audio player was invented by the late Roy Bowers of Reno, Nevada, and launched in September 1975. It sold for $210 in the late 1970s, the equivalent of $977 today.

It happens time and again. You’re on a quad alone with another skier or rider and start up a friendly conversation. Nothing too serious. No politics.

“Great day, huh?”
No response. Not even a nod.
Then there it is: the telltale cord from beneath the

helmet to a hidden iPhone or Samsung. Your chairmate is totally zoned out on music. It’s hard for even the most gregarious among us to compete against the 3,500 songs that can be stored on a 16GB iPhone. So you sit in silence for the entire ride.

The use of portable music for skiing is hardly a re- cent Millennial dodge to avoid real life. Portable music goes back a long way—to 1975, to be exact, when skiers first carried their music on a large chestpack.

It was revolutionary for its time. The Astraltune Ste- reopack was a portable, personal audio player created by the late Roy Bowers of Reno, Nevada. Launched in Sep- tember 1975, the automotive-style stereo cassette tape deck fit into a padded sleeve and was worn on the chest using a harness. Inside was an array of five rechargeable bat- teries good for about five hours. The orange headphones hung under the chin, and controls were protected by a zippered flap. A serious purchase, it sold for $210 in the late 1970s, the equivalent of $977 today.

“The sound was great, as good as a home unit with earphones, so there was little sacrifice. The cool factor was part of it. After all, this was a real innovation,” says Lee Kovel, a marketing executive and filmmaker from Los Angeles.

Today, Astraltune has its own fan Website (just- abuzz.com/astraltune.shtml), a Wikipedia page, and ex- amples are frequently listed on eBay. Justin Purington, a software engineer from Weare, New Hampshire, created the fan page after searching the Web for information about the Astraltune, and was “shocked and saddened” to find almost no information about it. He developed a Website in the hopes that the first sports stereo would not be forgotten to history.

Astraltune promised “blizzard-proof features” in adver- tising at the time. A company ad in the September 1978 SKI magazine reads somewhat inexplicably, “Used to be the only difference between skiing and making love was finding your rhythm, until Astraltune,” while a company brochure is headlined simply, “Get high and fly.”

One former Astraltune fan is Bernie Weichsel, who organized the first professional freestyle tour in 1974, part of the International Freestyle Skiers Association.

“The top freestylers used it to choreograph their ballet routines. Then during competitions their music was played over loudspeakers lining the course,” says Weichsel, currently president of BEWI Productions, and recent inductee into the U.S. Ski and Snowboard Hall of Fame. “Average skiers back then didn’t want to ski with a 3-1/2 pound brick strapped to their chest. And if you fell forward on one, whoa-boy.
“They were the original Walkmen, in a way,” adds Weichsel, who still has an Astraltune at his home in Wayland, Massachusetts. “But when the Walkman came along [in 1980], which could easily be stored in a pock- et, Astraltunes fell out of favor.”

Resort operators were leery of Astraltune’s use out- side of freestyle training. Even today, ski resorts have reservations about personal music on the slopes.

“Earbuds, especially at higher volume, could prevent skiers or boarders from having full, 360-degree awareness out on the slopes,” says Dave Byrd, Director of Risk and Regulatory Affairs for the National Ski Areas Association (NSAA). “Having the ability to have all your senses available, especially on a crowded day, is invaluable when trying to stay safe.”

Adds Brian Fairbank, chairman of The Fairbank Group, which operates Bromley, Cranmore and Jiminy Peak, “Freestyle kids were allowed to practice with them on restricted terrain. Obviously, our concern for safety played a role. But look at today,” he laments. “Buds everywhere.”

ISHA director Jeff Blumenfeld, a resident of Boulder, Colorado, founded Blumenfeld and Associates PR, LLC, in 1980 and is recipient of the 2017 Bob Gillen Memorial Award from the North American Snowsports Journalists Association.

From Jet Stix to Tinkle Tabs, these crazy ski products faded, fizzled or failed to stand the test of time. […] 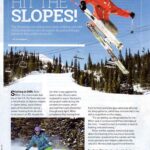