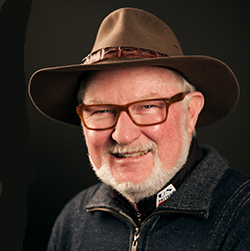 Tom Kelly excelled as the voice of the U.S. Ski Team through three decades – and 100Olympic medals. An award winning sports and news photographer in Wisconsin, Kelly leftthat field in the fall of 1977 to work as the PR Director at Telemark Lodge in Cable,

Wisconsin, an innovative alpine and cross country skiing resort. It’s also where he met CaroleDuh, who would become his wife in a marriage for over 30 years (with four children, 10grandkids and four great grandkids).

During that time he was an active leader of the U.S. Ski Writers Association (now NASJA) inthe midwest. Those experiences would propel Kelly to join the U.S. Ski Association in 1986,and in 1988 he would step into a public relations leadership role that he would hold for thenext three decades as the team’s VP of Communications.

He served as the chair of the FIS PR and Mass Media Committee for a decade. Kelly is aprolific writer, penning hundreds of columns for the local Park City paper, a skilledphotographer, and an inspirational public speaker. He served as a board member and thenchairman of the U.S. Ski and Snowboard Hall of Fame, where he modernized selectioncriteria, and is the recently retired chairman of the Alf Engen Ski Museum. Kelly runs TomKelly Communications LLC, a PR consulting agency focusing on Olympic sports based in ParkCity. You can reach Tom at tom@tomkellycommunications.com.